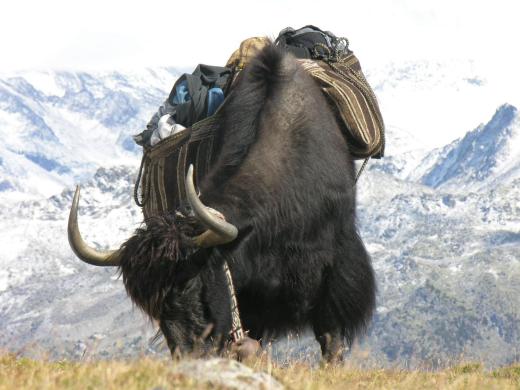 Today, I send into your meditation The Griffins. A few nights ago I dreamt of two golden griffins. The dream had a number of twists and turns, but at the end I found myself on a dirt road, traveling through a valley toward a mountain ridge, on the back of a gentle and warm yak. Not a bull, a yak. It seemed to be late summer, early fall as it is now in the Northern Hemisphere. The vale was golden, the sky a twilight blue. The road wove into a wood as it began to ascend into the mountains. I remember thinking of the old saying, “The oxen is slow, but the Earth is patient”. I felt no sense of hurry and a feeling of contentment pervaded my attitude. 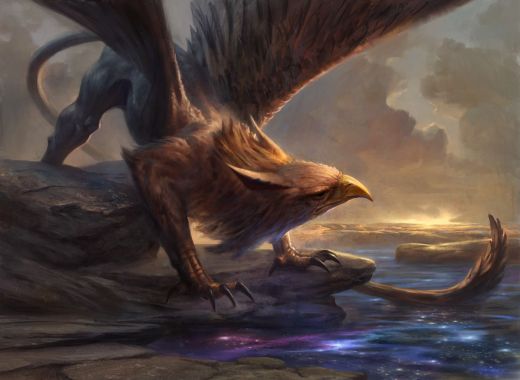 As I rose up the side of the mountain I came upon two golden griffins (body of a lion, head of an eagle, often with talons for hands and paws for feet). They were sitting at a small cafe table, in the middle of this wood, enjoying cups of tea from fine bone china, outside a small cave opening. I couldn’t imagine my good fortune, stumbling onto this Wonderland-esque scene and turned the yak off the road toward their table.

The dream changed quickly and I found myself entering their small cave instead. The inside of the cave was much larger than the outside betrayed. Inside were many children, seemingly impoverished by their clothing, but all beside themselves with joy. At first they asked me to help them with their financial circumstances and I eagerly sat down to help. In no time, however, I found myself on the floor with them, laughing and playing peek a boo, while they climbed all over me and the room in which we sat. The feeling was of being immersed in a sea of puppies. I remember all of these happy faces with brown and blue eyes, smiles – some of them missing front teeth, and all of them full of energy. We played for I don’t know how long, but sometime later, I awoke.

First let us visit the Griffins. This from Wikipedia, “…because the lion was traditionally considered the king of the beasts and the eagle the king of birds by the Middle Ages the griffin was thought to be an especially powerful and majestic creature. Since classical antiquity, Griffins were known for guarding treasure and priceless possessions”

Logically then, we would assume my golden griffins were guarding a particularly special treasure, yet no precious metals or diamonds did I find in this cave-dwelling. In fact, little tangible material at all. The children were in rags and some of their faces were smudged from having been playing in dirt or mud. The few furnishings were made of plain wood and of simple design. The space lacked any adornment or embellishment, yet the room was aglow with a golden light, as if filled with gold itself. All of what we consider prosperous or providing security was absent. 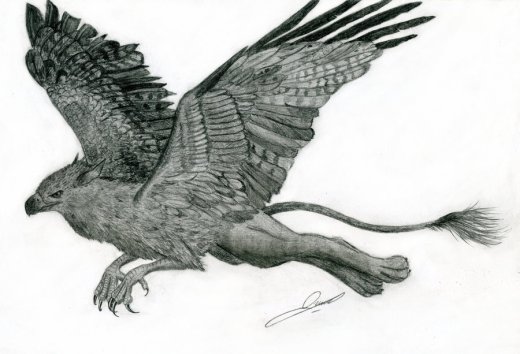 Thus, it would seem the treasure here was joy, playfulness, spontaneity, freedom to be oneself, foolish silliness, community, friendship, and laughter. The bounty was a warm lap to climb into, a hug, kisses on cheeks, races and hide and seek, followed by more let’s pretend. Every child looked well-nourished and even their hair shined in the luminous light even as their clothes were not. The concern for finances seemed almost a ruse to get me to sit on the floor with them to play in the real richness of the moment.

I have thought of the dream often since I had it. At first, the exotic nature of the griffins was my main focus, as you don’t dream of golden griffins sipping tea very often. Yet, over time, I found the children the clearer gift. The source of most of the magic. The message seemed clear. The treasure in life isn’t stuff. Its the joy, warmth and love we are capable of sharing and spreading like contagious giggles with one another. Playfulness is a wealth every man or woman possesses. Delight the food of gods, that nourishes beyond measure. This gift, not piles of precious jewels, were what the golden griffins were attracting me too, so sublimely as they sat daintily sipping tea. They weren’t guarding me out, but enticing me in. Once I’d turned toward them, my destination into the cave was immediate. 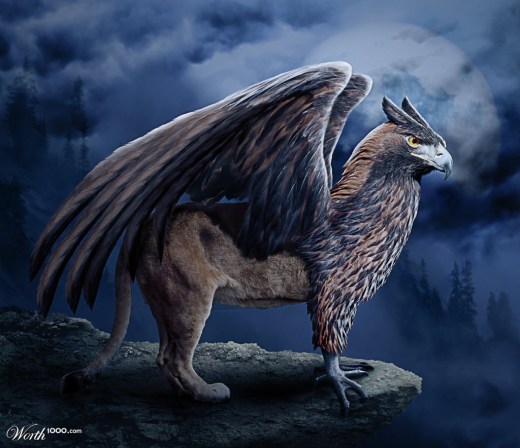 So I say in this very moment, do not let meditation be the only source of profound spiritual connection you give yourself this day. Find someone, anyone, to laugh with, to hug, to love deeply, to surprise and be yourself with, to step out of your routine and be completely spontaneous with. Laugh more than you complain today. Smile often at all whom you meet, there’s bounty in that simple gesture. If you are lonely, and find a short list of friends to turn to, then commit now to change. Even if to do so will force you out of your comfort zone, be inconvenient and make you risk seeming foolish. Do not impoverish yourself of the great richness this life has the potential to offer all of us, if we’ll stop worrying about what anyone else thinks and begin, even with small steps to follow our bliss. Lay down your financial woes, breaking their dominance on your mind. Invest in the present for the gifts that lay here for you, if you’ll just turn off those old roads you’ve traveled for so long.

If you enjoyed this piece, please consider checking out my book at the link listed below or the one listed at the top of this page. Thank you! 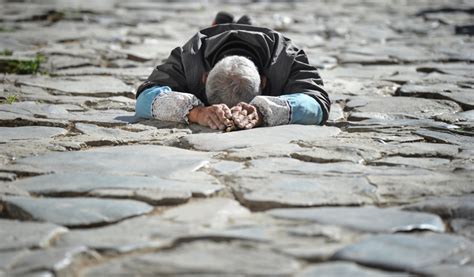 Today, I send into your meditation hypnotized. Recently, I have been playing with the Enneagram and one of the quotes from The Enneagram Institute really struck me:

“Reflect on this teaching about Transformation today: The important thing is to set aside some time each day to re-establish a deeper connection with our True Nature. Regular practice serves to remind us over and over again that we are hypnotized by our personality.” (The Wisdom of the Enneagram, 347)

Oh… that I could say pride in my personality was not something I have struggled with. That I have not found myself totally enamored with my own awesome persona. Humility and clarity have taken more decades than I care to admit and more effort than building a pyramid with no tools should take. I have spent a good deal of my life hypnotized by my own personality and believed this was the whole point of a life. This…. THIS… is who I am.

To constantly improve on this person I believed myself to be was the crafting of ages, to be admired surely. Minimize the defects, enhance the attributes and be glad when most people only notice the latter. I could not, did not see myself clearly. 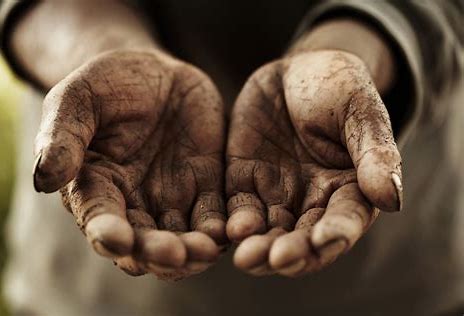 The last several years has seen a deep humbleness settle upon me that I bend to willingly and with joy. I wonder that I struggled so hard and for so long. The more I let go of what I think I know about myself and the world, the more I see how vast my blindness goes. As I embrace how limited my vision in most things is, the more humility seems a simple choice, no different than donning a coat in acclimate weather. Where once stood a great pride for my impressive bits of knowledge squirreled away for important occasions, now lives a quieter woman living a significantly simpler life. Where once it seemed important to impress, now the house of cards lies neatly stacked again in it’s box. There is far greater interest in being awed by the immensity of galaxies, the depths of a human heart, the tales of summer winds to direct me home, than to intellectualize my spiritual path. These days it seems wiser to be quiet and clear, than loud and cloudy.

In my youth, I saw humility as a sign of weakness and a lack of confidence in oneself, failing to see my pride was the absolute telltale sign of a weaker internal sense of self and the ear marker of someone who didn’t value themselves in any real, authentic way. The humbling was, as it is for all of us, painful but now I see so clearly it’s necessity. Our personalities are such weighty things we drag around with us like a hermit with it’s shell. Wrapped so tightly in these personas it’s hard for anyone to really see our light, including ourselves.

Humility has brought me great comfort, as a cat curled upon my lap. It softens me, and makes tender my view on virtually all that I could gaze upon. Humility brings silence unabated, while pride breeds a ceaseless chatter to sustain itself. To be humble is to let go at ever greater levels and there is such deliciousness in that unwinding out of what we’ve built. The fascination with oneself makes us miserly trolls trying to hold on to every last trinket we think enhances the view. While there is immense spaciousness in humility, because the stories to sustain the personality have fallen away. We are left with a simple cotton robe, rather than armor made to deflect anything that can disturb the personalities precarious hold on itself. In that robe we have a sense of movement and ease.

Humility is a divine grace we enter, as we let fall away the lifetime of stories we’ve used to construct our sense of who we are. In our humility we become authentic, naked, empty of what serves the ego, and full of what serves the spirit. As we allow this to permeate all of our being, we see. We see with new eyes. We hear with new ears. We experience the Universe and others in wholly new ways. Our intuitive voice rises and our heart leads the way ahead.

And so today I bow to each of you. May the scent of dirt fill my nose and consume my lungs, as I revel in the fantastic nature of my nothingness. May my eyes see only divine’s great work and the beauty in all things. May I live all my days wondrously blind to all that does not heal and become so deaf I can no longer hear the din of war and only the ocean’s surf that sings of peace. May my steps slow, knowing there is nowhere else to be, but in this precious moment given to me. May the path to serve open before me, as long as my legs have strength to move. I am now, have always been and will always be your humble servant.

If you like this piece, do consider checking out my book with the link listed above or simply click here. Thank you!

Where The Soul Dances With Light
purehaiku

LIVING IN THIS MOMENT

Expanding Fully in this moment, understanding ourselves deeply, finding happiness