Someone’s Coke had exploded on the window; no telling how long ago, but it looked old and crusted. The waves fill in the scene between the running, brown spots telling a tale of holidays and luggage, children eating crushed sandwiches with chips and foamy soda. My nieces are giggling in the booth behind me and I pretend to read my book. In truth, the ocean moving beneath my window is far more intriguing. The girls launch off to the outer deck leaving the Coke and me and the dark green sea. Such a vast ocean full of life and dancing seagulls that laugh at soda and women longing for their vacation not to end.

I breathe deep and feel the sand still embedded in my sandals rubbing against my heal. The vacation may be over but my morning walks are alive within me as I sail for home.

Some mornings the temptation to lie in bed would be great, but the island is a haven for bird migrations. The dawn is full of winged song and chattering old maids. Plus, I knew few walked the beaches in the morning leaving it mostly to myself. By nine o’clock people would be staking out their spots for the day, especially close to the water, but at the crack of dawn it’s a random dog walker and one or two folks likely fallen asleep on the beach from too much drink the night before. 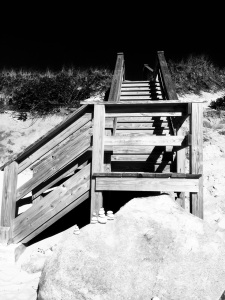 As I walk the surf rolls over my feet, a tempting lover, but hard to get. It’s in the way she pulls at my ankles then drifts back into the sea as if she could careless at my response. I chase her, as any sun-drenched lover would and she covers my legs with love. She could beguile the hardest soul winking delicately in the new dawn and makes positive beggars out of crabs whose claws outstretch demanding she return them home.

I collect stones and fill my pockets, smooth and black or mica-covered quartz the favorites. I walk, rubbing them, committing to a seaside rosary of sorts as I speak to spirits that pull my hair into the wind. Salt graces my lips and I lick it off for breakfast, smiling at the seagull who hovers wondering what I dine on. “The same as you, my friend. The same as you.”

I came upon a stingray, likely dead, but his eyes were still open and partially covered by a pool of water. I pulled him back into the seaweed thick surf and he quickly disappeared under the rolling garden. I could not tell if he lived or merely vanished in a tangle of kelp, but for some reason I felt very satisfied. After a time walking the beach I wondered at my need to deliver him from his death. We all must leave this plane at some point. The sight of death rarely disturbs me and I am at peace with the beautiful eco-system that has a purpose for even the decaying body. I sat on the sun-warmed sand and watched the surf for a long while. Clearly that day, I did not want either him or myself to be anywhere else but with the sea.