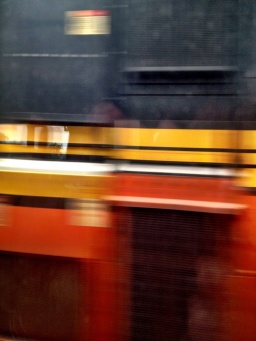 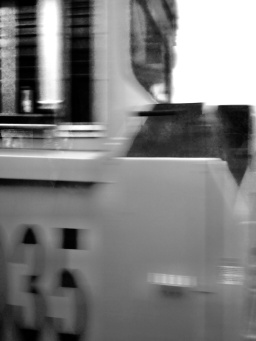 In the distortions and flashes I see my image. The bridge of my nose another geometry in a flashing landscape. Coal has already passed on the previous cars – strapped lumber, too. The rails are one of the few places in the country where a passenger goes last. Passenger trains stop for all the cargo that moves. Milk and oil tankers, flatbeds of slate and shale and bales of grasses for cattle lands. Graffiti is a color smear against the gun metal.

My reflection comes and goes between the cars and I realize this is true of all of me. I am what exists between each thought, as life exists, flashing between each car. 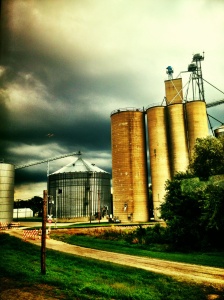 Silos of the Heartland: Photos by Noelle 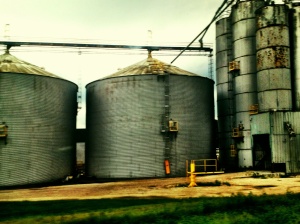 Worlds great and small rise and decay along the tracks. Underbellies of mediocre villages and hard edges of factories share the same trail. Worn and haggard becomes beautiful, in a countryside of weathered barns, while never enticing anyone closer. Haunting are silos abandoned while compelling to even the dullest mind to look more closely.

Heather and golden rod litter the edges of hundreds of fields, rich in the green of cornstalks and soy. Yellow are the elder stalks from earlier harvests ready for the straw-men of autumn, while bales for the harvested fields already line the lanes. The clacking of the train cars shifts as the train makes its turn heading north past the width of the Great Mississippi. Muddy spillage pours from drains as the floods of summer still fill its low banks. Barges and small crafts pass beneath the train bridge on their way to the deltas of Louisiana.

Ancient seems this story of fields and metal, floods and drought. Harvests come in that stave off the bankers and pays for the baler before summer’s out. Corn packs the pickups and soy to the moored barges to the south. An endless cycle of life and movement from field to mouth.